Leaving money on the table is the last thing most people want to do. Yet that’s just what some building owners and developers are doing, according to Connecticut Green Bank.

“The broader real estate community is not really aware of C-PACE yet,” said Mackey Dykes, vice president of commercial and industrial programs at the bank. “It’s still a relatively new tool and we’re still getting the word out.”

C-PACE, or the Commercial Property Assessed Clean Energy program, is one of Green Bank’s financing options designed to accelerate the adoption of clean energy by making it more accessible and affordable for businesses and consumers. Qualified candidates borrow money for energy efficiency, renewable energy or other projects and make repayments via an assessment on their property tax bill.

The financing arrangement remains with the property even if it is sold, facilitating long-term investments in building performance. 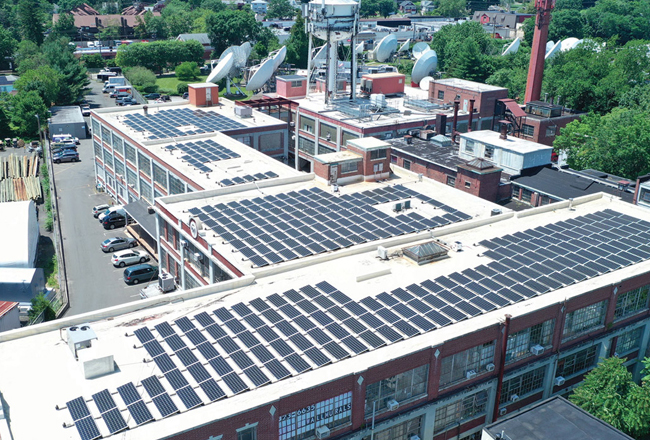 One firm that’s been convinced of the value of C-PACE is Norwalk’s Spinnaker Real Estate Partners, whose CEO Clay Fowler said his firm had been looking “for quite a while” at various means of installing solar panel systems on existing industrial buildings.

“But minimizing your footprint has got to be economically viable as well,” he added.

Working with 64Solar, a solar energy equipment supplier in Port Chester, New York, led Fowler to Green Bank to help tackle the job of installing its first-ever solar panels at Glenbrook Industrial Park in Stamford, the old Phillips Milk of Magnesia factory that is now home to more than 50 small businesses.

Work at the 181,216-square-foot-building at 650 Glenbrook Road, constructed in 1943, involved installing a 135kW roof-mounted solar photovoltaic system as well as roof upgrades. The total project cost was $437,326. Spinnaker received $417,053 in C-PACE financing over 20 years with an estimated average annual energy cost savings of $51,440.

Spinnaker repurposed the 122,000-square-foot warehouse building at 345 Ely Ave. in Norwalk into a multitenant industrial facility and renovated a former engineering plant at 300 Wilson Ave. in South Norwalk into the SoNo Ice House, a state-of-the-art sports facility with two ice rinks.

Fowler said that together the three projects will realize an estimated $203,700 in annual energy savings, for a total of $4.07 million over the 20-year term.

Spinnaker has several other projects in development that could utilize C-PACE financing through Green Bank, he added.

“I give a lot of speeches at real estate forums and the like,” Fowler said, “always talk about being responsible as contractors in general and in real estate operations specifically.”

His company is also included in a video touting C-PACE that was produced by Green Bank.

Dykes noted that while C-PACE financing is now available in more than 30 states, Connecticut’s version was the first statewide program of its kind in the country.

“It’s not a national model yet,” he said, “but it’s getting there.”

However, Dykes warned the current incentive structure will, in accordance with state law, change when Connecticut’s net metering program ends on Dec. 31, 2021.

“It will still make financial sense” to explore C-PACE funding, he said. “But now is the time to take full advantage of it before those changes go into effect.”